I absolutely love Whoopie Pie Recipes, like my Carrot Cake Whoopie Pies Recipe we shared for Easter a while back! I mean, really, who doesn’t love Whoopie Pies? I have such great memories of eating whoopie pies and oatmeal raisin pies with my paternal grandfather growing up as a child (mostly the latter, as they were his favorite). Whenever I see an oatmeal raisin pie in the rack at gas station snack section, I think back to sharing that tasty treat with my grandfather…but I prefer Whoopie Pies so much more, especially when they’re freshly homemade! These 12+ Wonderful Whoopie Pie Recipes are all super fun alternatives to cookies or cupcakes…and whoopie pies are actually quite easy to make! 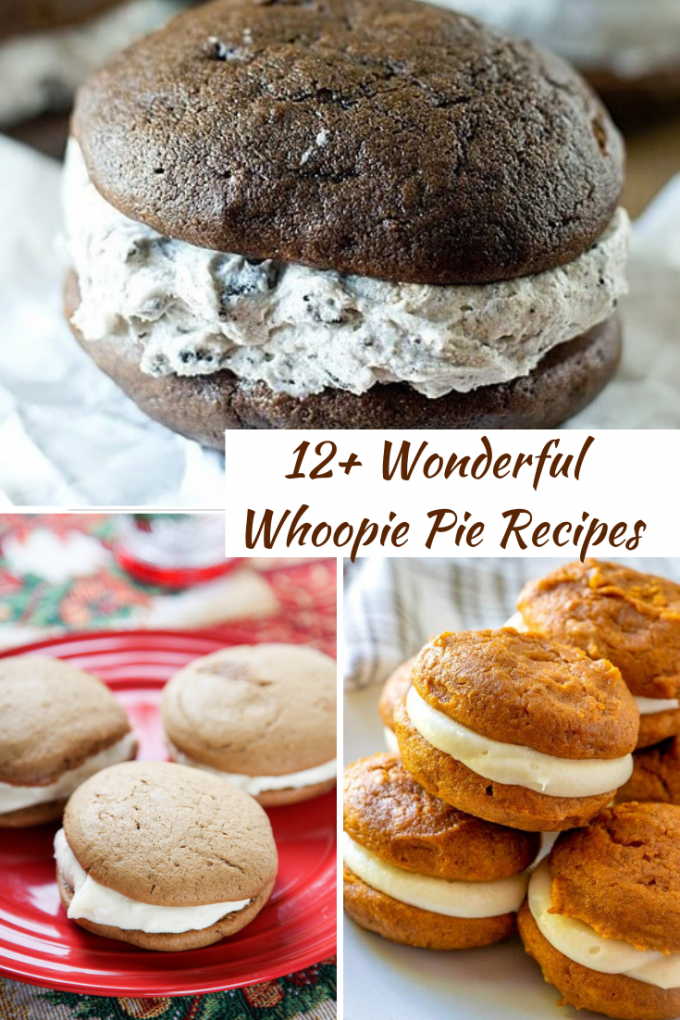 Why is it called a Whoopie Pie?

Wikipedia says: The whoopie pie (alternatively called a black moon, gob [term indigenous to the Pittsburgh region], black-and-white, bob, or “BFO” for Big Fat Oreo is a US baked product that may be considered either a cookie, pie, sandwich, or cake. It is made of two round mound-shaped pieces of chocolate cake, or sometimes pumpkin or gingerbread cake, with a sweet, creamy filling or frosting sandwiched between them.

According to What’s Cooking America: These cake-like whoopie pies were considered a special treat because they were originally made from leftover batter. According to Amish legend, when children would find these treats in their lunch bags, they would shout “Whoopie!” I can’t even remember the last time I had a Whoopie Pie, it’s one of those things that few people make, but when they do, everyone eats them up quickly! These Whoopie Pies Recipes fit every occasion and every different type of taste buds. Whoopie Pies are very simple to make, as long as you have the correct equipment. Whoopie Pie tins are very reasonably priced on Amazon, and they even have some special shapes available!

Oh, and don’t forget to check out my yummy Carrot Cake Whoopie Pies Recipe in addition to these 12+ Wonderful Whoopie Pie Recipes!