And then I met the Army Guy on Tinder. I didn’t want to go out with him. I was scared. I hadn’t had a date in Miami in six months – in all of 2016. We texted for about a week and I stood him up on our first date. He was so persistent and so sweet and funny… and I caved and went out with him the next night. I was trying to get my friends to give me permission to just stand him up. They threatened to murder me if I didn’t go into the restaurant. Then he was CALLING ME ON THE PHONE from the parking lot. He called me two times from the parking lot. From the PARKING LOT, GUYS. Thirsty much?

I went in. He was amazing. I was like….”OH SHIT.” I wasn’t expecting to like him so much. I honestly didn’t expect to like him at all.

I’ve never taken a photo with ANY of the men I’ve dated in the last year. I never even take photos of THEM. Army Guy? I took a selfie with him at dinner. Halfway through dinner I actually got up from the other side of the table and sat next to him. I don’t even remember why…He was fantastic. Charming, funny, talked nonstop, made me laugh SO HARD. He made constant eye contact. I had no intentions, I just wanted to have dinner and a drink and enjoy a conversation.  After we finished dinner, we went to a nearby bar and after a while…I asked him to take me home. I know, I know, judge me all you want, but I’m a 30-something woman in her sexual prime and he was a good-hearted, handsome 28 year old man who said all of the right things and I KNEW right away that this could be something. Call it woman’s intuition, but I am a great judge of character and I just felt the goodness radiating off of him.

I travel a lot, so we texted all that week while I was away at work. I sent selfies from the Finding Dory red carpet premiere in LA. I came back, and we saw each other twice that weekend – I even took him to meet my best friend at a party. MY BEST FRIEND. After knowing him for exactly one week. He kept leaving the pool table to steal kisses. My friend was like, how long have you guys been together? Are you in love already?!

Me: This is our third date…

It was like that. He called and texted constantly. He asked me to spend the night almost every night. We would be on the phone at 8 pm and he’d ask me to come over and watch a movie and spend the night. It wasn’t even “Netflix and chill”, it was cuddle and stroke his hair while we watched a movie and go to sleep. Like – really, not even having sex, just sleeping.

After about a month, I took him to Key West with me. As you know, Key West is my favorite place in the world. I shared that with him. 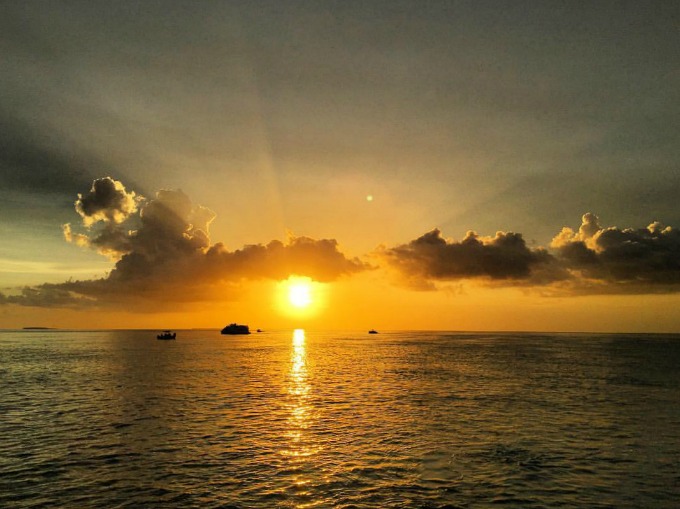 He had spoken about wanting to relax in a hammock due to work stress…I found a hotel with a hammock under the palm trees. We did sunset cruises, had a few drinks, made love, tickled each other, ate really good food, laughed our faces off…

I was crazy about him. This is me the day after we got back, at the beach with a girlfriend. He texted me all day. I was so fucking happy. I had my own towel on the bathroom towel rack, a key to his apartment…I wanted him to be my boyfriend – something I didn’t expect to want this soon after my divorce. I stopped even talking to other guys…to be honest, I didn’t even go on a single date since the first time I went out with Army Guy. I didn’t need to…he filled all my time and he made me happy. In the very beginning, I was still talking to other guys because we were just starting out, but I always stood them up when we made plans. I preferred Army Guy’s company.

After we got back from Key West, his work got busy, we only saw each other once a week or so, and he became distant…One weekend (two weeks after our Key West trip), I spent the night, and we had a talk about whether or not we were dating anyone else, and neither one of us was, so we had the “I guess we are exclusive” talk. He said he didn’t do relationships, his life was too volatile (military life), and I told him, “I am not seeing anyone else, neither are you. Guess what, motherfucker, we are in a relationship. It doesn’t have to have a name or be weird.” He asked to meet Angeline. He joked, “Will she call me Daddy?”

The next day after our exclusive talk, he found out he was being stationed somewhere else. We talked about me coming to visit…two days later, he found out he was going to be immediately deployed. Even though it had only been two months, I was crazy about him. I still wanted to continue seeing him until he moved to the other state, and see what happened. I wanted to see it through, you know?

The next week, we took a trip to Disney World with my daughter. It was his first real vacation, his first visit to a theme park. He met two of my best friends, he spent three days with my daughter and I. He got “loot,” what we bloggers call “swag,” fancy dinners with Disney executives…he got a taste of what my life is like. He also made a great Instagram Husband, if you’re familiar with the saying! ha!

I tried to show him…this is the life I lead. Fun. Excitement. Adventure.

He is obsessed with Alice in Wonderland…I made it my mission to make sure he met her and I took a million photos. He was like a kid on Christmas morning. He immediately updated all of his profile photos on social media with the photos I took of him. We had a long talk on the way back from Walt Disney World about what the future held for us. There was maybe a little crying. There was some yelling, some pleading, and there was me, for the first time since my divorce, opening my heart to a man and telling him how I really felt.

He didn’t want a relationship, didn’t want to be tied into a commitment…I realized during that talk that while I was starting to fall for him? He really didn’t care that much…not in the way that I cared about him. I caught feelings and he didn’t, not really.

I felt tricked. He ACTED like he was crazy about me. I was blindsided that he had no real feelings for me. I was kind of heartbroken, but he agreed that we’d continue seeing each other until he left and see where things went from there. But…then he broke up with me. Well, first he semi-ghosted me for two weeks, and I was going insane, so I sent him one of those “be a fucking man and tell me where we stand” texts, and THEN he broke up with me.

That was a few weeks ago, and I never got to say goodbye. Do know what it feels like to almost fall in love with a man and not be able to say goodbye? It’s heartbreaking. I wish I had closure. This was my first real dating thing since my divorce, and I wasn’t prepared for it, and it ended in such a strange way. But it was a great experience in the end. He was an amazing man. He never lied to me and he made me happy for a while. It’s renewed my faith in love.

I went on a date right after he officially ended it, trying to shake it off and distract myself, but it didn’t work…and that date kinda ghosted me too. WTF is up with dudes ghosting?! How did that become a thing? Oh wait, I do that to guys too. Okay, okay…

Now? I’ve deleted my Tinder app and booked a flight to NYC for next weekend. Catch Flights, Not Feelings used to be my motto, but Army guy made me want a solid connection with a real man and something substantial: feelings.

I went to NYC for work this week and fit in some time to see my friends, and my buddy Reggie said, “You seem different. You’re happy, aren’t you?” And you know what? I was for a while, because of Amy guy. And I am now. I am a little sad and sometimes I pull up his Instagram and see the photo I took of him and sigh…but for the most part, I am happy. I spent a while deleting all of his photos from my phone, and today I deleted his number, unfollowed his Instagram and unfriended him on Facebook. I texted him telling him that I am here for him as a friend if he needs me, but wasn’t going to connect on social media because it made it easier for me to let go. He was like, “Appreciate it, thanks.”

I told y’all last week that I hate dating. This is why. Not only does dating suck, but getting dumped does too. Especially when the guy is so nice that he doesn’t even do anything WRONG when he breaks up with you, besides being a wimp and not doing it to your face.

I’m going to become a nun.

(Update: nun life sucks and I reinstalled Tinder and lined up two dates for this week. I might be a nun but I need a social life.)