This Cinnamon Toast Crunch Popsicle Recipe post may contain affiliate links which means we receive a small commission at no cost to you when you make a purchase. As an Amazon Associate I earn from qualifying purchases.

This is such a fun, easy Popsicle recipe to make! If you have little children at home, this is an extra fun recipe to make! I don't know about your children, but Angeline loved popsicles and freeze pops when she was little...and so did I and my sisters! Did you have an ice cream truck that went through your neighborhood at certain times of day when you were a kid? We did and we listened out for that jingle music every afternoon after school, begging our mom for a dollar so that we could get an ice cream. This Cinnamon Toast Crunch Popsicle Recipe is much healthier when you make it at home, and much cheaper too! WHERE CAN I FIND THE RECIPE CARD FOR THIS Cinnamon Toast Crunch Popsicle Recipe?

If you’d rather skip all of my cooking tips, important information for this recipe, and similar recipe ideas – and get straight to the Cinnamon Toast Crunch Popsicle Recipe, just scroll right on down to the bottom, where I have a printable recipe card just for you! I know that a lot of people are old fashioned - like me! - and like to have a printed out recipe card.

Are recipe books still a thing in your household? Check out these cool recipe books (blank so that you can fill them up with your own recipes!) on Amazon! What Kind of Kitchen Equipment Do You Need to Make This Cinnamon Toast Crunch Popsicle Recipe?

Now, I am firm believer in using what you have on hand when it comes to things around the house...but what on earth could you possibly have in your kitchen that could perform the task of making Popsicle? Granted, you could use a glass or cup, but what the heck kinda Popsicle would that be? Would it even come out of the glass once frozen?

If you would like to make this Cinnamon Toast Crunch Popsicle Recipe or any other Popsicle recipes I may have on the blog, go ahead and buy yourself a Popsicle mold! There are plenty of styles and price ranges on Amazon and I have picked out a few for you! Are you looking for more fun home made popsicles recipes?

I love popsicles and eat them often, but I only have a few recipes on the blog - but they're amazing, so take a minute to check them out! I hope to continue adding more unique popsicle recipes to the blog this fall, maybe apple cider will be next! What do you think? How to make this Cinnamon Toast Crunch Popsicle Recipe

If you are struggling to find some of these specialty supplies due to the COVID 19 lock down, check out all of the pantry item available to you on Amazon! They have most household supplies fully in stock in their warehouses! You can even get free delivery on orders with Prime.

Mix yogurt, milk, and cinnamon until smooth. Blend all ingredients in a blender until smooth, and then sprinkle in the cinnamon toast crunch cereal. Pour this creamy mixture into your popsicle molds, leaving ½ inch at the top, and then insert the popsicle sticks and allow the popsicles to freeze overnight!

Freeze your delicious little cinnamon-y creations overnight, as they need a good amount of time to freeze solid. I would say that they need at least 8 hours. 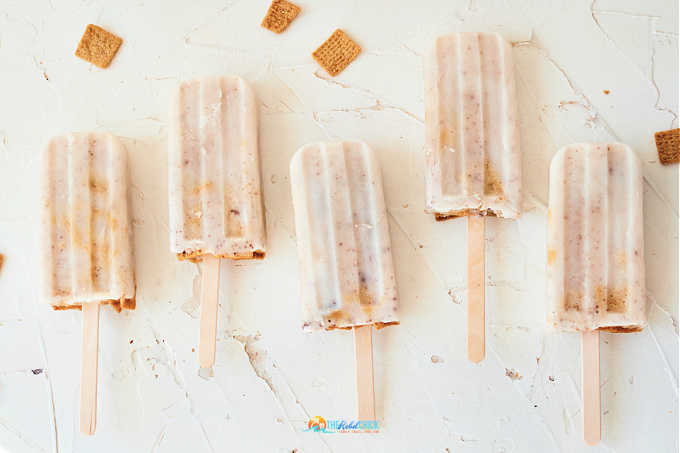 To print this Cinnamon Toast Crunch Popsicle Recipe, simply click the recipe card below! I know that sometimes it is easier to go off a recipe when it is printed right in front of you. Who wants to swipe their screen on their phone or tablet when their hands are greasy? So I love offering this option as well! SHARE THIS Cinnamon Toast Crunch Popsicle Recipe WITH YOUR FRIENDS ON SOCIAL MEDIA!

If you enjoyed this Cinnamon Toast Crunch Popsicle Recipe, please take a moment to share it on social media for me! I would love the exposure to new readers! As most of you know, the economy for blogging is not doing so great right now, so I’m working double time trying to get my reader visits up! I don’t really do sponsored posts on my blog anymore, so I rely on advertising revenue as a source of income.

Thank you so much for all of your support! Each time you share a recipe on social media, it helps me pay for my hosting fees and expenses so that I can keep bringing you these fun recipes!