I’ve just returned home from eight glorious days on the newly-upgraded Carnival Freedom. I was invited on a complimentary cruise to check out the multi-million dollar update and after spending eight days on the ship, all I can say is…What a ship! I had never cruised on the Carnival Freedom prior to the upgrades, so I can’t compare the before and after…but I can tell you that the “after” is magnificent! 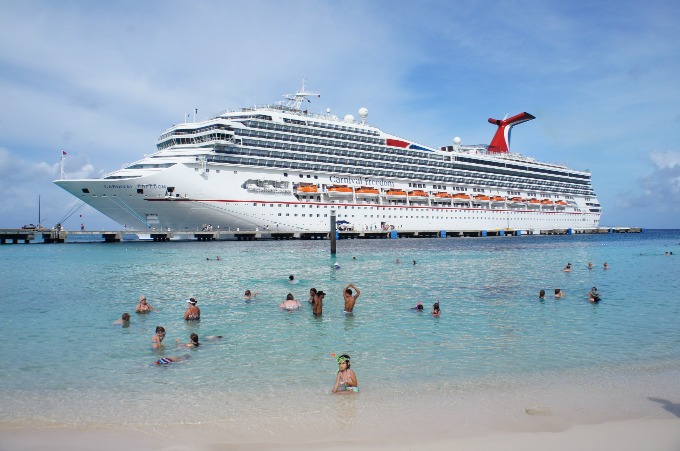 Our Carnival Freedom cruise took us to Grand Turk, La Romana, Curacao and Aruba, with three days at sea as well. I have to tell you, as much as I loved those ports of call, the sea days were just as much fun! You see, part of the new upgrades on the Carnival Freedom were components that made it a FUN Ship: branded eateries like Blue Iguana Cantina and Guy’s Burger Joint, fun bars like the Alchemy Bar and EA Sports Bar, and the luxurious adults-only Serenity area. There was no shortage of fun things to do on our fun day at sea!

That is, when we weren’t taking advantage of the three pools on the Lido Deck, or two whirlpools, or the super fun waterside! Over 700,000 children cruise with Carnival every year, and the new Camp Ocean and Dr. Seuss branding will make those kids happier than ever!

Part of an exclusive agreement with Dr. Seuss Enterprises, Bookville features iconic décor, colors, shapes and funky furniture inspired by the whimsical world of Dr. Seuss. Here, kids and their families can read beloved Dr. Seuss books or stretch their imagination through fun activities such as arts and crafts, toys and Dr. Seuss-inspired games. Bookville will also be featured on the new Carnival Vista when it debuts in 2016. Bookville is part of Seuss at Sea, a dining and entertainment experience inspired by the world of Dr. Seuss. The program also includes the Green Eggs and Ham Breakfast with the Cat in the Hat and Friends, which requires a reservation and a $5 surcharge per person. We experienced firsthand during the last sea day on the Carnival Freedom and it was so much fun and the food was delicious! Camp Ocean is the new Camp Carnival, which I think the kids will love even more! It’s all about bringing the wonders of the ocean to the inside of the cruise ship for the little ones to enjoy! There’s the Penguins for kids 2-5, Stingrays for kids 6-8, and the Sharks for kids aged 9-11. In addition to fun new spaces – from miniature play igloos for the Penguins to interactive gaming stations for the Sharks – Carnival Freedom’s new Camp Ocean facility includes Party Reef, a common area that brings each of the groups together, as well as a breakout room for arts and crafts activities called Creative Cove.

Of course, there’s still the Carnival clubs for older kids, Circle C for 12-14 year olds and Club O2 for teens 15-17. Angeline and her friends LOVED Club O2, and we practically had to drag them out of there any time we wanted to see them!

Carnival Fun Ships have some of the best food ever. If you’ve never been on a Carnival ship, then let me share some of my favorite things about their special branded eateries: the Guy’s Burger Joint and Blue Iguana Cantina! Both of these branded restaurants are completely free of any surcharges, unlike other cruise ships that have a fee for their special eateries.

The food is absolutely amazing! I ate cheeseburgers almost every day while on the Carnival Freedom, they were that good! I fell in love with the Blue Iguana Cantina last year on the Carnival Liberty and was so happy to see that the Carnival Freedom now has this fantastic burrito and taco eatery! You can have any combination of breakfast or lunch taco or burrito you want, and they make it fresh right there! The Carnival Freedom also features a specialty steakhouse, the Sun King Steakhouse, which has a fee of $35 per person for a five course meal.

I ordered the filet and while my meal was complimentary as a guest, I can tell you that I would gladly pay $35 for that meal again! Entertainment on the Carnival Freedom

There are so many different forms of entertainment available on the newly-upgraded Carnival Freedom! From Hasbro, The Game Show and family-friendly comedy shows at the Punchliner Comedy Club presented by George Lopez, to Broadway style shows for the whole family, you’re bound to find something fun to do when you need a break from the pool time fun. There are also four brand new revues on the Carnival Freedom! Carnival’s Playlist Productions now include:

80s Pop to the Max – This high-energy show channels the era of Day-Glo, Spandex, and big hair with spirited performances of the hottest music video hits from the 1980s. From the pop-rock of Duran Duran and Cindy Lauper to the smooth soul of Whitney Houston and Michael Jackson and beyond, 80s Pop to the Max takes audiences back to days when “video killed the radio star.”

Heart of Soul – This mesmerizing show tugs on the heart strings, capturing special romantic moments with recognizable R&B and soul hits from a host of legendary singers, from Aretha Franklin and Stevie Wonder to Otis Redding, Ray Charles and Al Green.  In a unique twist, six lucky couples are chosen for a special night of romance with VIP seats, champagne and flowers.

88 Keys: The Rock n’ Roll Piano Show – Goodness, gracious great balls of fire!  Highlighted by sing-along hits from Billy Joel, Little Richard and Jerry Lee Lewis and others – as well as an appearance from Carnival Freedom’s own piano bar pianist — 88 Keys: The Rock n’ Roll Piano Show spotlights these talented artists who have taken the term “tickling the ivories” to a whole new level.

One of my favorite parts of the Carnival Freedom upgrade is the addition of the Serenity adults-only retreat, which I loved on the Carnival Sunshine last year. There’s a lounge area in the shade, plenty of lounge chairs, a full bar, two whirlpools and lots of peace and quiet! The 8 day Southern Caribbean cruise is the one we just did, and has ports of call in Grand Turk; La Romana, Dominican Republic; Curacao; Aruba.

I’ll be sharing more about the newly-upgraded Carnival Freedom in the coming weeks, as one post just isn’t enough to cover it all! Plus, I bet you guys are just dying to know about the awesome ports we visited too!

In the meantime, you can find out more about the Carnival Freedom on Carnival.com!