Check out my handy tips for How to Wear Mala Beads on Your Wrist and Raise Your Vibration! Mala beads are much more than a lovely bracelet, they also act as a powerful meditation tool.

Mala beads may appear to be only attractive jewelry, worn by both men and women around the wrist, or occasionally on the neck.

However, these smooth and shiny, evenly-sized beads on a knotted cord go beyond mere beauty and adornment.

This How to Wear Mala Beads on Your Wrist and Raise Your Vibration post may contain affiliate links which means we receive a small commission at no cost to you when you make a purchase. As an Amazon Associate I earn from qualifying purchases.

Mala beads can be crafted from a variety of materials. Some of the most beautiful are made from genuine gemstones and rudraksha seeds, or blueberry beads, which are used as Hindu or Buddhist prayer beads.

Sandalwood is also often found in malas. This fragrant wooden bead brings another of the five senses into the meditation, further improving concentration and mindfulness. The Guru bead is the last bead in the mala string, completing the loop. Typically larger than the rest of the strung beads, the Guru bead represents the teacher, who has given the mantra to the student for recitation.

Between each bead is an overhand knot to hold it in place on the string.

A tassel is then attached to the Guru bead in the mala string. At the point where the beads come together, the tassel may be interpreted to represent the oneness of our souls, connected with one another, and with the divine essence. Choose your wrist: Malas can be worn on either wrist, although the right is often said to be the more traditional.

However, if you are right or left handed and you want to avoid catching your mala bracelet on something as you go about your busy day, you might simply wear the mala on your non-dominant wrist.

Touching the malas during your daily activities can help you to stay grounded and remind you of your positive affirmations, intentions or mantras. You may notice the beads making sounds, or clicking, as they touch one another when you move.

This soft sound can also be a reminder of your mantra, and may bring you a welcome sensation of calm at any moment.

Touching and cleansing: Some say that mala beads should never touch the ground. If they do, you might like to gently cleanse them. You can also cleanse the mala occasionally to preserve its beauty and power.

Some say that your mala beads should never be touched by anyone, other than yourself, because this could reduce its spiritual energy. However, it’s up to you whether you wish to follow these traditional rules.

Wrapped mala bracelet: Since the Guru bead is often larger than the rest, it can serve as a handle or anchor point while you put the mala on your wrist.

Hold onto the guru bead and wrap the string of mala beads around your wrist a few times.

Wrap it so that it is comfortable for you, neither too tight or too loosely wrapped.

Use the guru bead to secure the bracelet, pulling it through one of loops around your wrist. Attach the tassel to the last loop of the beads. You can allow the tassel to dangle or tuck it under one of the bead strands, whichever you prefer.

Double-wrap mala bracelet: Connect two mala necklaces by pulling the guru bead of one mala through the final loop of the second mala. Hold the guru bead and wrap the mala around your wrist several times.

Secure your bracelet by pulling the guru bead through any bracelet loop of choice, and pull the tassels through the final loop on your wrist. How to Wear Mala Beads on Your Wrist & Where to BUY Them!

Should a Wrist Mala Have Less Beads?

Mala bracelets may have 21 or 27 beads, as opposed to the full 108 plus the Guru bead of the necklace style. Some devoted Buddhist practitioners use malas of 21 or 28 beads for prostrations, repeatedly moving from standing position to kneeling with the forehead on the ground.

However, you can wear either the short version or the longer mala, or even more than one if you like, wrapped around the wrist multiple times as described above.

It is considered best to wear the mala touching your skin, and under your sleeve if you have long sleeves. 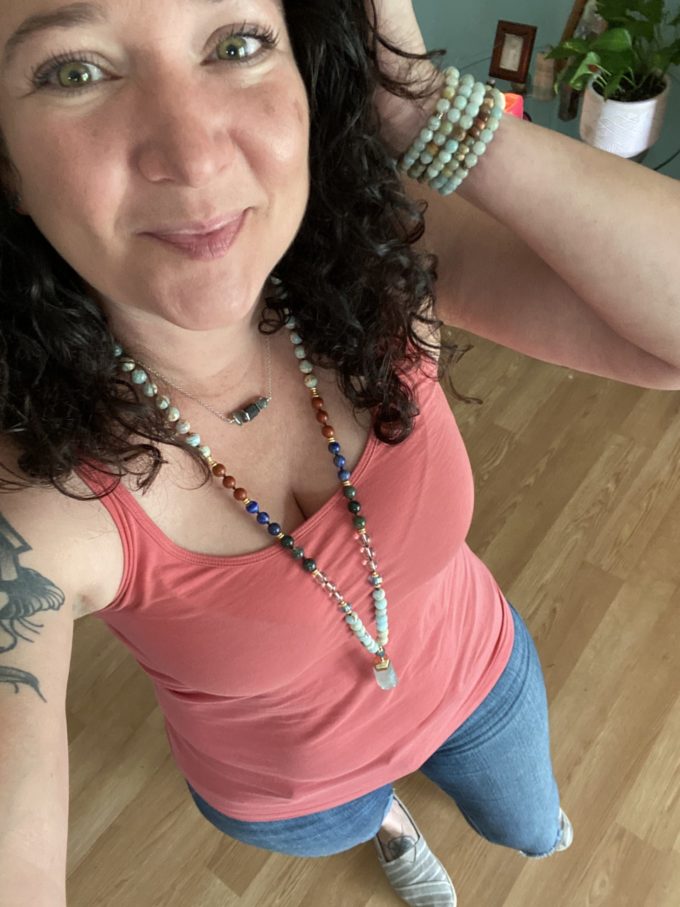 What is the Deeper Meaning? How are Mala Beads Used?

Mala beads have a spiritual purpose and are typically associated with the practice of meditation.

While there are important mala thread color meanings, the beads have meaning as well. Specifically, mala beads help to count mantras, prayers, intentions, or affirmations in Japa Meditation.

In this practice, a mantra is slowly repeated while calmly, quietly meditating. The tactile sensation of touching the uniformly-sized beads, and the movement of your fingers from one bead to the next, help bring intense focus while chanting the mantra.

The goal of meditation is to exist completely in the present moment as part of yoga practice, or the sacred Hindu or Buddhist tradition.

Mala beads can be compared to the Catholic rosary, with its string of beads used in a similar manner.

The rosary beads, like malas, are a kind of tool to provide centering, acting as a concentration aid, during prayers in the religious tradition.

The mala is also similarly used in Jainism and Sikhism. Sacred malas are made and often seen in Bali, India, Nepal, and Tibet. When not meditating, the beads can be worn in order to preserve spiritual energy.

Are you looking for the Mala Beads that I am wearing in these photos? Get the exact same one on Amazon!

I have been wearing these exact Amazonite Mala Beads as a bracelet for about four years now. I have had to replace it twice in that time, as I didn't use to remove it before showering.

They are super high quality and such a soothing energy about them, I can't imagine NOT wearing it.

You can also find these other lovely Amazonite Mala Breads which are very similar!

Why is Amazonite such a powerful - and popular crystal for Mala beads?

Mala can be worn as part of a spiritual practice or simply as an adornment. Serving a dual purpose, the mala can help you experience beauty both inside and out, while you remain peacefully grounded in the present moment.

The mala can be worn as a necklace, or as a bracelet wrapped around the wrist. While some prefer to wear a shorter mala on the wrist, the longer 109-bead mala can be worn, wrapped multiple times. Tradition has it that the mala be worn on the right wrist, next to the skin, and touched by no one but the wearer. Ideally, the mala should not touch the ground and should be gently cleaned if it does.

No matter how you decide to wear your mala bracelet, make sure it is comfortable on your wrist. May it bring you calm, peacefulness, compassion, and clarity in all you do!