I had every intention of chronicaling my divorce and recovery process in real time, but um…I got distracted by the world of dating men 10-15 years younger than I am. So here we are, playing catch up. I wanted to share this post months ago, but it’s still 100% completely true and current…I just had a “first date” last night and um…I don’t think he is going to ask me out again. ROFL

I hate dating. I hate it.

Like, I seriously hate it…like, stand guys up on almost every single first date, cancel dates, text message everyone I know from the parking lot asking for permission to drive home and drown my sorrows in red wine and block the guy’s number, taking Xanax before I leave the house…

This is me before a first date in March with a guy I really liked, whom I already knew as an acquaintance for a month or two, and had even already KISSED ON THE MOUTH before. See that look? That is the look of SHEER TERROR. Because: A DATE. I took this selfie at the bar and sent it to my girlfriend, who was sitting in her apartment waiting for updates. I was like “DO I LOOK EXCITED AND SELF CONFIDENT BECAUSE I CERTAINLY AM NOT?!” It was my first date in New York City. Why? Because I never really dated…being married for 14 years and then being thrust back into the dating world with a broken heart and deflated ego? It makes dating hard all on its own. BUT to make matters worse, I didn’t really date before I was married either. I was a serial monogamist. I’d meet a man and have a date or dinner, and BOOM: instant boyfriend.

I don’t know how to date. Like, is every guy I go on a date with going to want to be my boyfriend and marry me? Is every guy going to try to have sex with me? What if they think I am ugly and leave? What if they’re married?

WHAT DO I DO? What do I talk about? Hint: not the divorce, or how much you hate dating. Also don’t talk about the last guy you dated or how you usually pick up guys at bars. Dates don’t like that.

And then there’s the fucking texting and flirting and attempted sexting and all of that awful nonsense. I don’t know how to do any of those things. My first “sexy pic” to a guy after I started dating was me in a TOMS tee shirt and black bikini panties. I have literally posted photos that show more skin on my blog for sunblock campaigns.

I suck at being sexy. Seriously, this was a “sexy face” picture I sent to a guy I was involved with in California earlier this year. Yeah, Jenn, that over-sized sweatshirt and no lipstick? Super freaking HAWT. (not really) Well, I am getting better, but I still need to practice. I practice my posing and text my friend 89 billion pics and she tells me how to pose, what to adjust, etc, and then I usually end up with one semi-decent photo that won’t make a guy block my number.

I have about 5 “sexy pics” saved on my phone and every guy I get super duper flirty with gets the same photos. I don’t do nudes, so I’m just like meh, whatever. If a picture of me in my underwear leaks onto the internet, big deal. I post pics of myself in my bikinis all over the internet and they cover more skin.

BY THE WAY, DATING ON THE INTERNET SUCKS ASS.

I don’t use any online dating services, though I did sign up for a few in the beginning and just meh. I just use Tinder. Don’t even get me started on Tinder. OMG. I have met a few nice guys on there, but it’s basically a wasteland of men who want to wife me and put a baby in me on the first date and dudes looking for one night stands. Writing a profile bio, picking out profile pics. OMG THE STRESS. SO MUCH STRESS. Texting your single girlfriends asking for advice on what to write, which selfies to include…bleh. I have gone so far as to ask my dude friends (I have a TON of male friends) for advice on which pics to use. They’re very helpful, and some of them help me vet my dates too. I am serious. That’s how bad it is for 38 year old newly single gals, folks. My main “help me decide if I want to meet this guy” friend is a 26 year old due I hung out with once in NYC. He picked out the Army dude for me. He has great taste!

This is my actual Tinder profile. The pic is from January but I have more recent pics too. 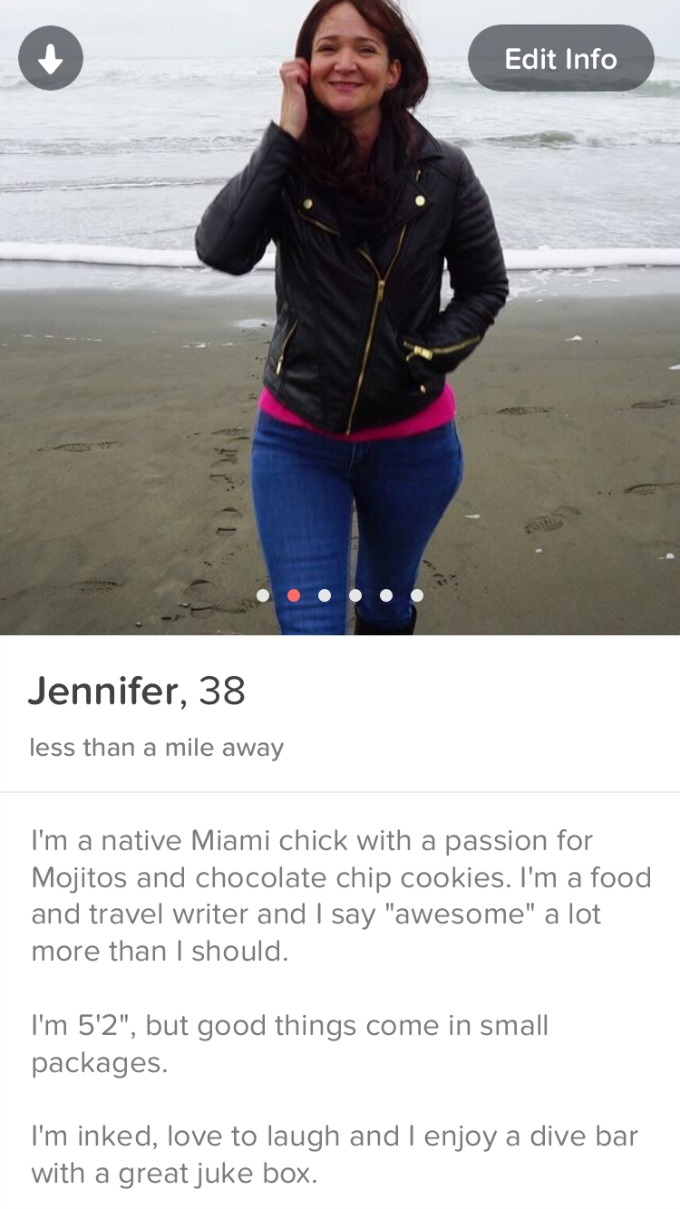 I did meet an incredible, amazing Army dude on Tinder in May when I got back from my European cruise….but that’s a story for another day. I’ll get to it, I promise. He was special. The wound is still fresh and I’m still busy deleting all of the photos of him and him and I together off my phone and trying not to think about him right now. We had real dates and trips together and everything. It was like A REAL THING.

Proof: Me on our third date (or maybe fourth?). He took the photo. It was our “fancy dinner date” and we dressed up and laughed, drank a bottle of wine and fed each other dessert and I was like, oh okay, maybe dating doesn’t suck. This is AWESOME. I don’t do dating very well. I hate it. But you know what I am totally awesome at? Talking to perfect strangers all over the world and making friends and picking up dudes off the street with zero problem. I’m so social, I have NO PROBLEM sitting down at a bar and turning to a dude and saying, “Hey, I’m Jenn. What’s up?” Almost every single guy I’ve been involved with in New York City (or Barcelona and across the Mediterranean) started with me just smiling and saying “Hi.” One time I smiled at a guy standing at a street corner and we exchanged numbers. I call it the “all-natural mating ritual.”

Maybe it’s just because I’m old and THAT’S HOW WE DID IT IN MY DAY! I met my husband…and previous two boyfriends before him…in bars.

So I have been officially “dating” and stuff since December, and it’s been crazy to say the least. I have gone on dates with two guys in Miami in all of 2016 – you have to remember that I travel almost on a weekly basis, so for the first six months of the year, I was hardly here. I have made plenty of dates in Miami, but usually end up standing the guys up, or cancelling…I even cancelled my first date with the Army guy. I dated the Army guy for a little over two months, and as soon as we “broke up” (we weren’t in an official “relationship” so it’s hard to describe how it ended), I immediately went on a date that night with some other military dude I met on Tinder to keep myself from laying around the house rereading his texts and feeling like a total loser.

It didn’t go so well.

BUT…I didn’t stand him up! I AM PROGRESSING, people. I even went out and bought a new dress instead of wearing my standard “first date dress.”

Dating sucks and I hate it, but hey, it’s better than sitting at home and watching Naked and Afraid and spooning your cat.