If you've been following along with my recipes this year, then you've probably seen the delicious Curly's BBQ recipes I've been sharing. I love working with Curly's because it's a brand that Angeline and I have been buying for years! What's not to love? You can find them at pretty much every grocery store in the refrigerated meal aisle, there are plenty of varieties, and they make for quick and easy meals for busy families...or in my case, single people who don't want to spend a ton of time in the kitchen when they're just cooking for one! I love the product on its own, but I also love getting creative and coming up with recipes using Curly's BBQ, like my recipes for BBQ Chicken Sliders, Enchiladas with Mango Salsa - and most recently, this Pulled Pork BBQ Arepas recipe! If you've never had Arepas before, then you're totally missing out! Arepas are pretty common at many fairs and festivals, but being in Miami, it's an everyday sort of food for us! Arepas are made with ground maize - cornmeal, basically - or flour, and I believe it originated in Colombia. Each South American country has their own spin on how Arepas are prepared, and having tried quite a few varieties, I have to say that they are all pretty tasty!

You can make Arepas from scratch...or if you're super lazy, or just busy, you can usually buy them in stores too! Well, if you are living in a place like sunny south Florida, where we have a dense population of Central and South Americans. I can actually buy Arepas at most bakeries and in every grocery store bakery! There's nothing quite like a fresh Arepa! Many grocery stores sell Arepas in the frozen foods aisle, but if you live in a place that has a heavy Latin influence, you can usually buy them in the bakery too!

For this BBQ Arepas Recipe, I used a store-bought Arepa, because hello! We're taking parties here, and who wants to spend all day cooking when you're preparing for a big party! There is enough to do as it is! Buying prepared Arepas takes one step out of the cooking process, leaving you more time to prepare for your party.

The whole point of having a party is to have fun, and while some do enjoy cooking, it shouldn't be required to spend all day in the kitchen. This BBQ Arepas Recipe is quick and easy, and very filling too! It can be served as a finger food, or during a sit down dinner, it's all up to you! I purchased cole slaw from my neighborhood Publix deli, but you can also make it from scratch following this Spicy Cole Slaw recipe...which I coincidentally made for a previous Curly's BBQ recipe post! 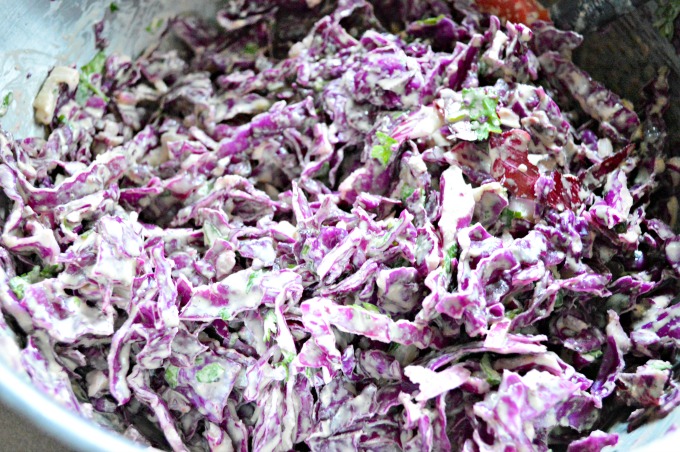 To prepare the dressing, add all dressing ingredients into a blender until completely blended/juiced, then add to the slaw vegetables in the large bowl; toss gently. You can find more delicious recipes by watching videos created by Curly’s Kitchen & Chef Clara. Just visit RoadTripEats.com/videos and a new tasty favorite is just a click away!

If you enjoyed this Pulled Pork BBQ Arepas with Coleslaw Recipe, I would love if you would take a moment and share it on Pinterest!