While my husband and I were in Saint Philip last year visiting the Crane Beach, our cab driver told us that if we had time, to try to find the famous Sam Lords Castle in Barbados.

He explained that it was an old, historical home that had been used as a hotel for many years, before recently burning down in an unexplained fire. We never did make it during that trip, and to tell you the truth, I had completely forgotten about it…

Until I started seeing people searching what happened to Sam Lords castle in Barbados and landing on my blog! Exploring the Ruins of Sam Lords Castle in Barbados

In July, after arriving at The Crane Beach in Saint Philip, we found it covered in kelp. It was also quite windy and between the two, we didn’t see the point of making our way down the beach.

When we visited in 2011 to find the beach covered in kelp, we made a go of it and ventured out. It was too difficult to swim and laying out? Not very fun in a bed of seaweed. Ariel I am not!

My heart was a little broken to find that after actually having the opportunity to set foot on one of the top ten beaches in the world, I wasn’t able to enjoy it. Again. As we were walking back to our car, we saw a little pathway and decided to see where it led. We had driven all the way around the other side of the island to find The Crane, and didn’t want the trip to have been a complete waste. This is what we found! Now, the underlying sand wasn’t nearly as pearly pink, and the waves were even more powerful on this side of the beach, but…

It was incredibly lovely. We set off in search of the castle, not remembering exactly where it was or how we were supposed to get to it.

We did a little old fashioned exploring. I wasn’t quite sure what I was looking for, but we did see a sign that literally said “Sam Lord Castle” and so we followed the signs.

What happened to Sam Lords Castle in Barbados? Simple enough. We hoped that what we were looking for was actually Sam Lord Castle. When we found the entrance (photo above), we knew we had the right place.

So, What happened to Sam Lords Castle in Barbados? Now, our cab driver from last year told us that it was an old castle, an old hotel, and that there had been a fire.

What we did not know was how bad it was…As we found our way through the woods, this is what we found… I was stunned. It is so difficult to capture on film the magnitude of what we saw before us. While Sam Lord Castle isn’t incredibly enormous, it has a presence about it, even in ruins, that takes your breath away. 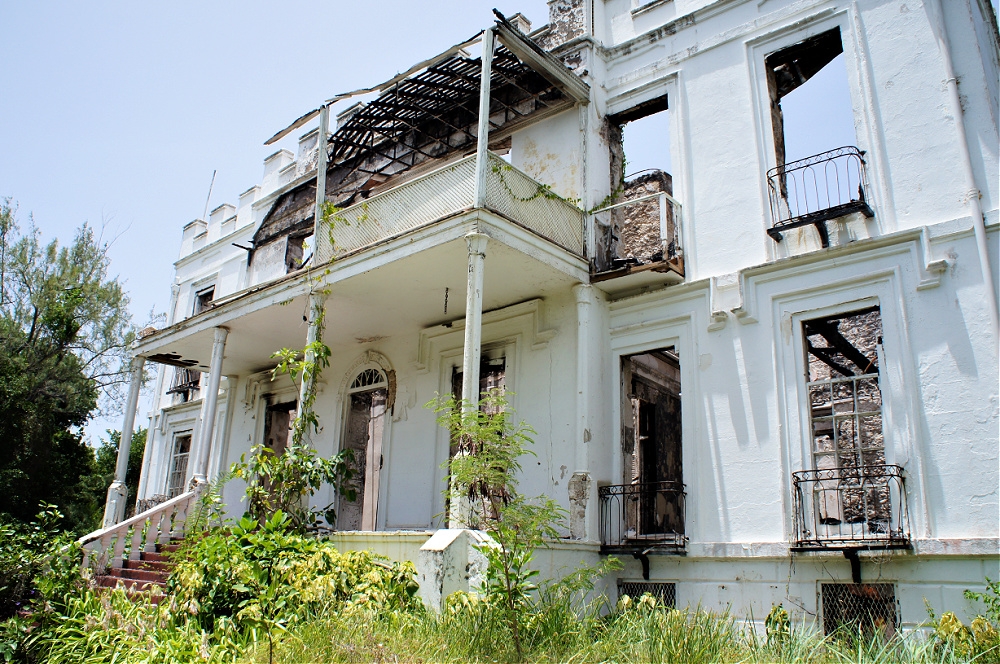 It was literally burned to its foundation. All that was left was the original walls. Chris and I walked around towards the back and realized what an incredible structure it must have been at one point. We found the remnants of extravagant landscaping in the back of the hotel. We found an empty pool, spots where Jacuzzis must have once been housed. Just as we were about to leave, we noticed a path leading towards what we assumed would be the ocean. I was a bit nervous, so I let Chris lead the way.

Yes, I was a little chicken. So sue me. The entire vibe of Sam Lord’s Castle creeped me out. It was so desolate, so isolated – like, what if something happened? I guess I went into mom mode! There was what we thought must have once been an elaborate walkway, with carved coral rock and benches for resting and enjoying the ocean breeze. The beach was magnificent!

It seemed that some local fishermen had set up shop on the deserted beach behind the Sam Lord Castle estate. My favorite thing about this? The tire swing…and this sign. I did my research after we were back at the Hilton and found that in its day, the Sam Lords Castle hotel had very posh bungalows all along the beach, with private cabanas, bars and the usual beach amenities.

Located in the parish of St. Philip, Sam Lord’s Castle was a beautiful Georgian mansion built in 1820 by the notorious buccaneer Samuel Hall Lord, known as ‘Sam Lord’.

Legend has it that Sam Lord acquired his wealth by plundering ships, which he lured onto the reefs off the coast, by hanging lanterns in the coconut trees. Captains mistook these lights for Bridgetown and wrecked their ships on the reefs.

The property was run as an exquisite hotel for many years but unfortunately it was consumed by fire in 2010.

Do you notice how all of the palm trees are swaying? The wind is so constant on this part of the island that the trees grow that way.

It is quite lovely. Of all of the places I’ve seen in my travels, I have to say that Sam Lords Castle in Barbados was one of the most interesting.

I can’t wait to go back and do a little more exploring! According to Barbados.org, Sam Lord’s is currently being reconstructed and will open in 2020 as a Wyndham Grand Resort!!! The 450-room resort will feature 3 restaurants, meeting facilities and a luxury spa.
371 shares