I don’t think I’ve ever written so much about a destination as I am about my time in Ireland during my two week long U.K. trip. As I mentioned in another post, Ireland has become my favorite country…I wish that I had spent more than 6 days there! I’ve written about the Drombeg Circle, as well as a brief overview of my time touring the Ring of Kerry through a complimentary tour with Rabbies Tours, but I really want to tell you guys more about Killarney and the surrounding area in more detail!

We spent two nights in Killarney, while exploring the things to do and see around the area during the day. One of my favorite things on the itinerary was visiting an actual shepherd and learning more about shepherding, the different kinds of sheep and the sheep herding dogs as well. I have a bit of a fascination with farm animals, sheep and goats in particular. I LOVE SHEEP. They are so adorable!

The Shepherd gave us a little background information about what shepherds actually do, how they run their land and flocks, and a brief history of how Ireland became known for their shepherding. The dogs even gave us a little show! I was so excited to see these border collies in action, as I have two Shetland Sheepdogs and often laugh as they herd the cats down the hallway, so it was a real treat to see REAL shepherd dogs shepherding their flock of sheep. We ended our first day with a visit to an ancient stone circle, The Cahergal Stone Fort, which I found quite fascinating. There are many stone circles still standing in Ireland, but the majority happen to be on private land, and the owners don’t want a bunch of tourists coming through their property. It’s a special treat to find ones that are open to the public – especially when they’re in wonderful condition. I find these types of structures so interesting, as we really don’t have anything like this in the United States. Our “ancient” structures are hundreds of years old, whereas things in Europe and Asia are thousands of years old. It really drives home to me as an American, just how young our country really is. There was also a deteriorating castle nearby, but it was too far to walk by foot and too far off the path for our van to make it in the soggy field. It was the one day I didn’t bring my zoom lens along with me, and I regretted it the moment I saw the castle! I stayed at a bed and breakfast while in Killarney, and boy did I love that town! It was full of restaurants, shopping and pubs. All of the action, so to speak, was on the main street, which had plenty of wide open sidewalks, with everything very easily accessible. One of my favorite things about the pubs in Ireland is that many of them also serve amazing food – it’s not just greasy old bar food – and they are big fans of live music!

My favorite pub in Killarney was Laurel’s Pub, which had an amazing selection of craft beer, as well as everything else you could hope to find in the way of liquor, including a ton of Scotch and Whiskey! I liked this particular bar so much that I went there both evenings I was in Killarney, had dinner there, and stayed until they closed. It also helped that the bartender was extremely handsome and very nice. And he told me that I could afford to eat dessert. When a man tells me that I should eat more, I tend to stick around to see what other wonderful things he may have to say…

I closed bars in Ireland left and right, folks. Most of them close at 11 or midnight, which I am really not used to at all, being from Miami.

There was even a bottle of Jameson “on tap!” Of course, with a bottle of Jameson just sitting there taunting me, and a ton of ciders and craft beers to my left, my drinking choices were very simple: a beer or cider, along with a shot of Jameson, then order dinner. About that food? I swear, I didn’t have a bad meal the entire time I was in Ireland. Everything I ordered was simple, but rich and hearty…it was real comfort food, which was perfect for the dreary, rainy weather and our long days of walking and being on the road. I ate a lot of lamb.

Almost every meal was lamb. They are both fluffy, adorable AND DELICIOUS. 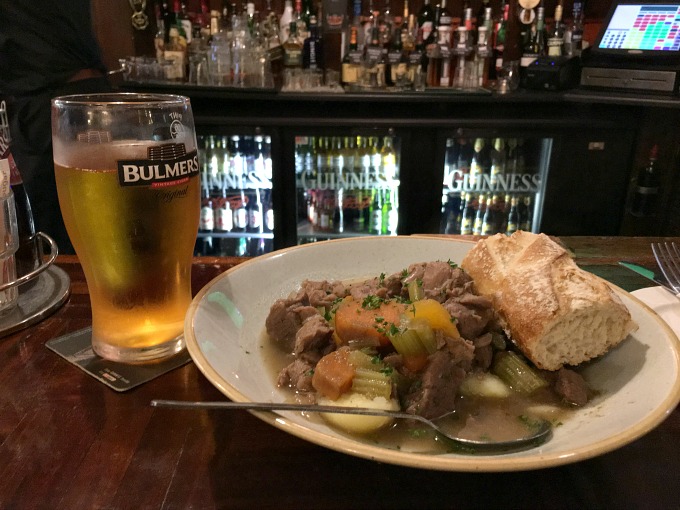 So that’s what I did during the evenings in Killarney.

During the first day, we visited the shepherd and the Drombeg Circle, and during the second day, we explored The Ring of Kerry, a classic route through 100 miles of beautiful Irish countryside. We stopped in Killarney National Park on our last day in the Killarney area, before moving onto Kinsale. Whether it’s a hike, a stroll through the forest, or just a visit to the beautiful Torc Waterfall, this is an absolute must for anyone traveling through the Ring of Kerry! The Killarney National Forest was absolutely stunning, a lush, dense forest full of the most beautiful trees I’ve ever seen. I can imagine spending an entire afternoon wandering through that forest after a picnic lunch! Someone else loved it too… We also paid a visit to Ladies View, one of the most scenic vistas I have seen outside of the Blue Ridge Parkway in North Carolina. It’s absolutely gorgeous, even on a rainy day! Imagine what it would look like if the sun were shining! Unfortunately, I eventually had to leave the Ring of Kerry, as well as my new tour friends, and set off to finish my time in Ireland in Dublin, which really grew on me in the three nights spent there during my trip.

I kind of love it.

And I’ll be back!

Rabbies specializes in small group tours, with smaller Mercedes passenger vans that accommodate up to 16 people. Tour guides take you to small towns, big cities, well-known national landmarks as well as their best kept secrets, and experiences are guaranteed or your money back! To find out more about this and other Rabbies Tours, visit their website at Rabbies.com. They offer tours in Ireland, Scottland and England!

« Explore the Ring of Kerry in Ireland with Rabbies Tours
It’s Back to Wine Time With the Ladies and JaM Cellars Wines! #JaMwinetime »