This post is long overdue. I don’t know why it took me so long to start working on editing these photos, because my trip to Bangkok and Siem Reap last year was one of my absolute favorites! I just sat down and started thinking about what to call this blog post, because I am not really doing anything except for sharing photos of a place that touched my heart. If you aren’t aware, Angkor Wat is the oldest religious structure left standing IN THE WORLD (well, that we know of, anyway) and part of an entire archaeological area of Angkor Archaeological Park. Built in the 12th century, it was original a Hindu temple, then Buddhist, and has always been used solely for religious purposes. The area of temples surrounding Angkor Wat is a place where you will spend the day wandering in wide-eyed amazement and walk away feeling that everything you’ve ever seen in your life means nothing.

So much older than anything that our modern little brains can comprehend! We are talking almost a thousand years old. A THOUSAND YEARS. It’s just astounding that something that old has held up in such a way that you can still recognize the majesty of it – it’s a crumbling ruin that is still so intact, it’s a real testament to the architects who built it so long ago. Angkor Wat means “Temple City” or “City of Temples” in Khmer, and the original name was Vrah Viṣṇuloka in Sanskrit, meaning the sacred dwelling of Vishnu.

Now, Angkor Wat isn’t just ONE structure – the entire area stretches across over 400 acres and you’ll need some sort of transportation to see it all, and your own two feet simply won’t do! My friend, Stefanie of MommyMusings.com, and I hired a Tuk Tuk for $20 for the day, and he drove us throughout the entire site over the course of the day. When staying in Siem Reap, you can easily book a Tuk Tuk through your hotel concierge or just by asking a Tuk Tuk driver on the street or in town – they all seemed to charge the same amount and are pretty fair. We arranged ours through the hotel concierge and it cost us about $20 and the hotel also included a package breakfast for us to take along with us. You have to leave your hotel around 5 AM in order to make it there by sunrise – which is the popular thing to do. 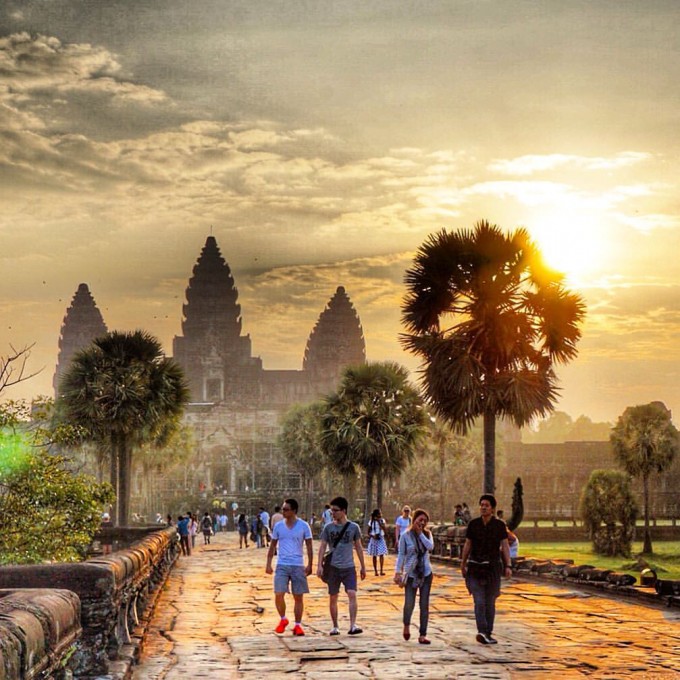 After watching the sunrise, we explored around Angkor Wat.

While the famous image is the one pictured above (that’s my original photo, but the famous shot is the three points of the main temple), Angkor Wat itself has other structures that are equally impressive. We even found a monk in one of the other buildings! After spending a while at Angkor Wat, our Tuk Tuk driver took us throughout the remaining areas, and I would say that we spent a good six hours in the sites that day. Each time we left one area, I thought the day was over…but nope! We moved onto another site. Each one had something unique to offer, like the temple of faces – or is it smiles? I’d like to think smiles… There were temples that looked like they were right out of Indiana Jones…and one of them was actually the site where the movie Tomb Raider was filmed! Some of the temples were obviously in better shape than others, but they all had a unique appeal. It was pretty impossible to pick a favorite. Have you ever been to Angkor Wat or the surrounding Angkor temples? I’d love to hear your stories! If you aren’t familiar with this incredible archaeological site, you can read more about Angkor Wat here.

« Making the Holiday Season a Little Merrier with #AflacHolidayHelpers
Why Do I Keep Meeting Awesome Guys When I Travel? »