Motorcyclists get a bad rap.

They are often accused of being stupid, careless, reckless….

And for the most part, it isn’t true.

My husband rides a bike and he is one of the safest drivers I know – so safe in fact, that he took a defensive driving course while and in the Marines AND he took a motorcycle safety course a few years ago.

But…I won’t deny that there are jerks out there that ride their motorcycles like they’re invincible. I’m sure there are plenty of personal injury lawsuits in OK, NY, CA and the rest of the country to back that up.

I can’t deny that there aren’t guys (and girls) on crotch rockets, flying down the Turnpike at 150 miles per hour, weaving in between cars, using the shoulder to pass cars…

I have seen it firsthand, as I am sure that many of you have! Those few idiots ruin it for everyone else.

I was irritated…but not surprised. 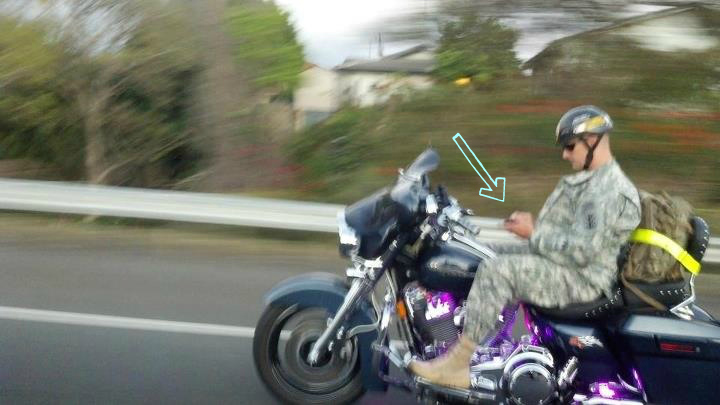 What’s that in this guy’s hand that has him not even looking at the road or having either hands on the handle bars?

There are so many things wrong with this that I can’t even begin with a coherent thought…of course, I will try anyway.

The biggest thing that bothers me about this incident is that this is a man in uniform. He’s a solider.

This is a man that most likely, has seen warfare, or will in his near future.

What do you all think he is going to do when he’s in the middle of combat, side by side with his fellow soldiers, and he gets a text?

That is what bothers me the most.