I am not really the creative type…which has always baffled me because I’ve always been a wannabe writer! You would think that creative writers would naturally be able to express their creativity through other means, but it’s not the case with me.

What does this have to do with the price of tea in China? (and what the hell does that really mean, anyway?!)

My baby sister is getting married in a few months. I want to help her with a few aspects of her wedding planning. My mom is on cloud nine, spending god-only-knows how many hours each day researching venues, favors, cake toppers, etc.

You want to know what I’ve done?

Nada. A big fat nothing.

Except…for create a wish list of stuff from EdenFantasys that I want to give her as a gift for her surprise bachelorette party (she doesn’t want a bachelorette party!!!). For some reason, when it comes to parties, I can get really creative!

I found these hilarious penis straw party favors earlier this year for a friend’s bachelorette party and she had a blast laughing as we all used them for our cocktails. I want to embarrass my little sister the same way! I love parties. I feel like I am missing out on fun if my sister doesn’t have a bachelorette party, and I realize that this is a selfish thing. But still. I want to have fun!

Once I realized that EdenFantasys had a party favor and gag gift section, it took all of the embarrassment out of shopping for my friend’s party – all I had to do was order online and everything arrived in a plain, simple white box and I was able to avoid the judgmental looks from my mail man.

I think I’m going to throw my sister a surprise bachelorette party. I’ll tell her we’re going for a girl’s night out and once she shows up…S U R P R I SE ! Think she’ll ever forgive me?

*I received a gift card to facilitate this review. I WILL be shocking my little sister with penis straws and sexy centerpieces, whether she likes it or not! 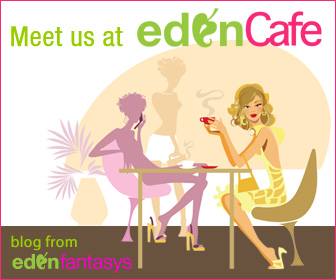 « My reflection says that I need to hit the elliptical!
Topic-less Tuesday…Stupid stuff my cat does. »