Universal Pictures just announced that the Pitch Perfect movie will now be hitting theaters in select cities on September 28, and everywhere else on October 5! I'm taking Angeline and two of her friends to see a special sneak peak tonight in Miami! Squeee!!!

You can buy your tickets now and make it a Pitch Perfect night with ticket deals from Fandango and Movietickets, how cool is that? You can get all of the details here! 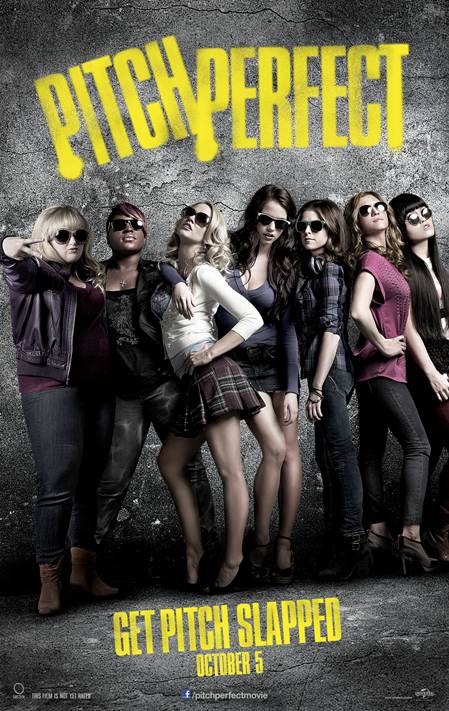 Need more of the Pitch Perfect movie before it comes to theaters?

Mike Tompkins a cappella version of “Starships,”featuring the film’s cast and over 300 user generated video submissions!  After you sing-along to the aca-awesome “Starships,” find out how to have a Pitch Perfect Night Out and win big!

This is the first time Tompkins has collaborated with filmmakers, talent and a studio on the official music video for a movie.  Tompkins, represented by Maker Studios is best known for creating his own unique twist on music covers using only his voice and mouth.  Tompkins and Alana Da Fonseca arranged this new a cappella version of “Starships,” which was written by Nicki Minaj, RedOne, Carl Falk, Rami Yacoub and Wayne Hector.

I’LL TUMBLR FOR YA

Pitch Perfect is on Tumblr! Follow "I'll Tumblr For Ya" to feast your eyes on custom .gifs and memes as they roll out! Get ready to bring it with the Pitch Perfect Meme Creator. Submit your most aca-mazing memes and you just might be featured on the film’s Facebook page! Start here.

Follow PitchPerfectMovie on Instagram for #PitchPerfect weekly challenges to get featured in the Pitch Perfect fan gallery. Let’s do this!

PITCH PERFECT AT THE VMAS

Did you miss the cast of Pitch Perfect at the VMAs last night?  Check out their full length lipdub of Nicki Minaj’s “Starships!”

BRING IT AND SING IT!

Watch The Bellas remix Bruno Mars’ and Nelly in the latest clip from Pitch Perfect. http://youtu.be/K0MPuAaHVDw

Ready to remix this business? The Pitch Perfect soundtrack will be released digitally on September 25, 2012 and physically on October 2, to pre-order the CD, visit Amazon. The album features tracks performed by the aca-awesome a cappella groups The Barden Bellas and The Treblemakers.

Beca (Anna Kendrick) is that girl who’d rather listen to what’s coming out of her headphones than what’s coming out of anyone’s mouth.  Arriving at Barden University, she finds herself not right for any clique but somehow is muscled into one that she would never have picked on her own: alongside mean girls, sweet girls and weird girls whose only thing in common is how good they sound when they sing together, in the new out-loud comedy Pitch Perfect.

When Beca takes this acoustic singing group out of their world of traditional arrangements and perfect harmonies into all-new mash-ups, they fight to climb their way to the top of the cutthroat world of college music competitions.  This could wind up either the coolest thing they’ll ever do or the most insane, and it will probably be a little of both.

Loaded with new takes on old favorites, to hits of right now that are seamlessly mixed together, mashed-up and arranged like you’ve never heard before, Pitch Perfect is directed by Jason Moore, who opened our eyes to the very misbehaved life of puppets in the surprise Broadway sensation Avenue Q.