I received a copy of Muppets Most Wanted for editorial review. This post contains affiliate links.

I have always loved the Muppets and was disappointed that my travel schedule didn't allow me to go see Muppets Most Wanted in movies. I ripped that Blu-ray package open as soon as it arrived and plopped down to give it a watch and I loved it! Muppets Most Wanted has all of the same characteristics that all Muppets movies have: humor, goofiness, a sizzling plot (well, you know what I mean, right?) and of course, the classic combination of Muppets and real people making hilarious cameos! The #1 comedy in America three weeks in a row, “Muppets Most Wanted” picks up immediately following the events of the smash hit “The Muppets,” as Kermit the Frog, Miss Piggy, Animal and the entire Muppet gang head out on a world tour. But mayhem follows, as the Muppets find themselves unwittingly entangled in an international crime caper headed by Constantine - the World's Number One Criminal and a dead ringer for Kermit the Frog!

Now Muppet fans can experience this laugh and song-filled caper like never before on Blu-ray Combo Pack in an all-new “Unnecessarily Extended Edition,” featuring 12 minutes of exclusive scenes not seen in theaters! Also included on Blu-ray and Digital HD are additional hilarious bonus features, including Statler and Waldorf’s version of the movie, and the laugh-out-loud gag reel, “The Longer, Longest Blooper Reel in Muppets History.”

This most sensational, inspirational, celebrational home entertainment release also includes the featurette “Rizzo’s Biggest Fan” and music video “I Can Give You What You Want,” performed by Bret McKenzie.

Don’t miss the most fun, most wanted Muppet movie ever when “Muppets Most Wanted” debuts in the following formats with bonus features as listed:

You can buy Muppets Most Wanted Blu-ray combo pack on Amazon for just $22.96!

Can't get enough of Muppets Most Wanted? Have a little extra fun with these free printables! 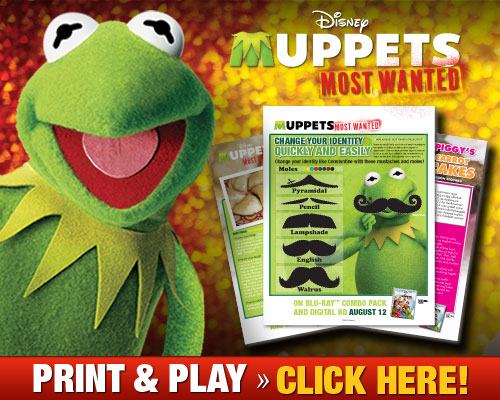 Get Social With Muppets Most Wanted!