As you might have noticed, I am a bit of a Disney freak! While I was 23 the first time I was able to make it to Disney World (and I still haven’t been able to afford a trip to Disneyland), I own an extensive library of Disney movies! One of my all-time favorite Disney movies, The Jungle Book, just released a Diamond Edition Blu-ray Combo pack!

I received a copy courtesy of Walt Disney Pictures for the purpose of this review, but obviously, I would have bought it anyway! This is the first time that The Jungle Book has been available on Blu-ray digital high definition!

I always find it a bit difficult to write reviews of the classic Disney animated movies, because what could I tell you about Disney’s The Jungle Book Diamond Edition Blu-ray that you didn’t already know from when the classic film was released on DVD?

Well…that’s the thing. Blu-ray changes everything! Of course we still watch Mowgli as he travels through the jungle on his adventure with everyone’s favorite Disney bear, Baloo – but now he is doing it in high definition! And Bagheera, the wise old panther we all know and love? He’s even wiser in high def. Well, I made that part up, but he looks wiser!

If you have never seen Disney’s The Jungle Book, now is definitely the time to do it! You can explore your own wild side as you join Mowgli, Baloo and the rest of the gang as they embark on an extraordinary adventure and celebrate the true meaning of friendship! The bonus features are pretty awesome too, my favorite was the alternate ending with Mowgli and the Hunter. I am getting a little old, so maybe I just forgot it from the DVD release, but I am pretty sure it’s new! Alternate Ending – Mowgli and The Hunter
Music, Memories & Mowgli: A Conversation with Richard M. Sherman, Diane Disney Miller and Floyd Norman
Disney Intermission – Bear-E-Oke hosted by Baloo
Bear-E-Oke Sing A Long
I Wanna Be Like You – Hangin’ Out At Disney’s Animal Kingdom

Diamond Edition Blu-ray on Amazon for just $28.96! That’s my Amazon affiliate link, so if you decide to buy it, you can help me earn a little commission by doing so through that link!

I was so excited for the release of Disney’s The Jungle Book Diamond Edition that I created a Jungle themed veggie platter for a blog campaign earlier this month. What do you think, could you see Baloo and Mowgli in there somewhere? You can catch a clip of Disney’s The Jungle Book right here! 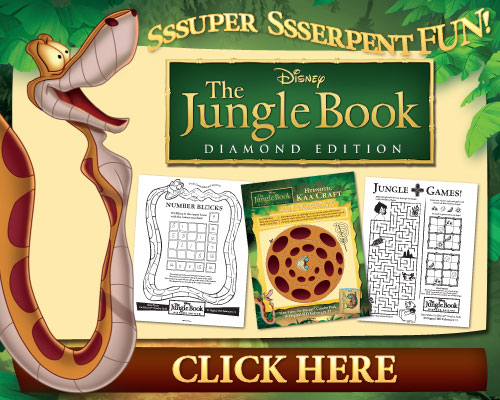 Get Social With Disney’s The Jungle Book!

« Looking for a Healthier Work-Life Balance? Check out Mom Corps YOU!
Have Fun With Play2Shop & Enter to WIN a $50 Giveaway! »