I’ve just come home from the most amazing experience of my life. I attended the Iron Man 3 Red Carpet Premiere at the El Capitan Theatre in Hollywood – and I actually walked the red carpet!!

I love the movies, and I love movie stars – but I’ve never been a celebrity hound, know what I mean? I was so excited about walking the red carpet, but it was more the experience of walking the red carpet that excited me than the possibility of seeing stars. To tell you the truth, I didn’t even really think that I would be walking with movie stars! When we arrived right before the Iron Man 3 premiere began, our fantastic Disney rep Marshall told us that we were going to wait until Robert Downey Jr actually arrived and got onto the red carpet so that we would be close to him. It was at that moment that I realized exactly what was going to happen…I realized that I was going to be close to him! And of course, other movie stars too! There was a throng of fans lining the streets, and I heard from security that they actually began arriving at 4 am to get a good spot in line! Because you can’t buy tickets to attend red carpet premieres at the El Capitan Theatre, if you aren’t given a ticket by someone working for the movie studio, you have to arrive early to have the chance of being close to the stars.

Children brought posters, tee shirts, toys – everyone was excitedly awaiting Robert Downey Jr’s arrival, hoping to get a chance to have him sign one of their Iron Man 3 items. You could feel the excitement in the air, the energy of that crowd was amazing! I had never felt anything like that before, it was even more powerful than sitting in the first row at at Blink 182 concert!

But I did get this shot as we walked right past him after he got out of the car and immediately began signing autographs! He was so amazing with the crowd; he never stopped smiling and signing as many autographs as he could before he had to begin interviewing with the press!

Even though I didn’t get to speak to him, just being a few feet away was amazing in itself! This is an official photo from the Iron Man 3 Red Carpet Premiere at the El Capitan Theatre that night, taken by a professional photographer.

Do you see that amazing smile?! It was mesmerizing! The Red Carpet experience was exhilarating, but it went by so quickly!! We were ushered along so quickly, but as we walked on our portion of the Red Carpet, the movie stars attending the Iron Man 3 Red Carpet Premiere walked in front of us – we were just separated by a small gate. I saw Don Cheadle, Guy Pearce – and Emily Vancamp from one of Angeline and my favorite TV show, Revenge, was walking along at the same pace as I was – she was right in front of me almost the entire time! I was snapping away photos of her and texting them as quickly as I could to Angeline so that she felt like she was walking the red carpet with me – she got so excited seeing that I was so close to Emily Vancamp! She asked me to tell her that she loves her show but of course, there was no time for that as Emily was posing for the press and I was being whisked along the red carpet into the El Capitan Theatre! I was able to find this section of the live streaming event online the next day and wouldn’t you know it, I totally photo bombed Guy Pearce and Emily Vancamp as I was trying to get my photo of Emily! So how was it walking the red carpet at the Iron Man 3 Premiere at the El Capitan Theatre?

It was amazing. I don’t think I’ve ever experienced anything quite as thrilling – and who knows if I ever will again! It was definitely one of those once in a lifetime experiences, and I will carry the memory of those few minutes with me for the rest of my life!

I can not thank Disney and Marvel Studios enough for inviting me to the #IronMan3Event and allowing me to be a part of this magical experience! 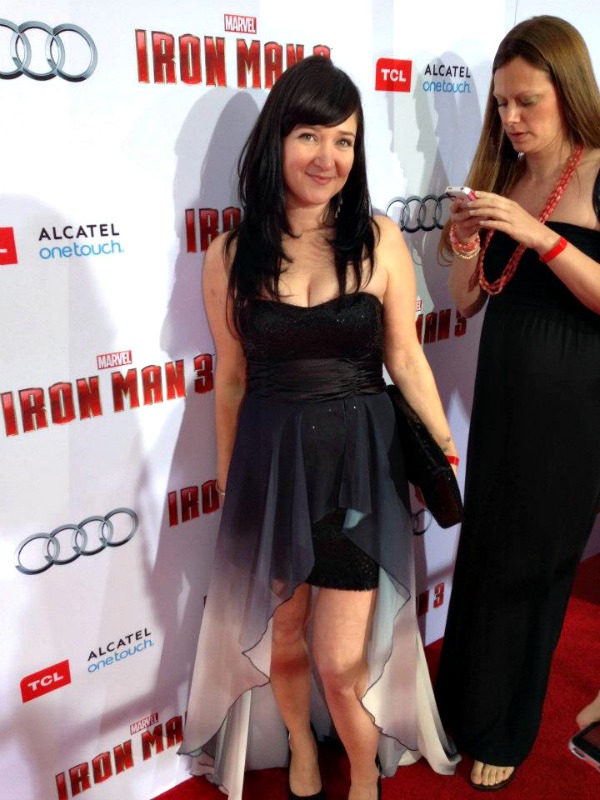 Oh wait, you probably want to see what I looked like, right?

Because the billion photos I posted all over Instagram, Facebook, Twitter and Google+ weren’t enough! We were quickly ushered along the red carpet as not to hold up the foot traffic as the other guests came in, so my friends and I took turns quickly snapping photos of each other as we had little pauses along the way. My friend Toni snapped these two photos of me with her DSLR and they came out so much better than the ones I got with my iPhone! I did my own hair and make up, so it wasn’t anything too fancy but I think that it came out nicely!

A super big thanks to Toni at Just Stop Screaming for snapping these photos of me on the Iron Man 3 Red Carpet Premiere at the El Capitan Theatre that night!

I was invited to attend the Iron Man 3 Red Carpet Premier at the El Capitan Theatre as part of the #IronMan3Event by Disney and Marvel Studios. My travel, accommodations and activities were complimentary as part of the event, but all opinions are my own!