I was born and raised in the balmy heat of Miami.

I kind of love it.

The sunshine, the beach, the afternoon rain storms, the everything-being-green-year-round, the hurricanes –

Well, maybe not the hurricanes, so much.

Growing up, I spent a lot of time in North Carolina during the summers, as my father is from the Asheville area. There’s no beach, but they do have mountains – big, beautiful, green, densely forested mountains. So when I married my husband, and he told me that there was a huge mountain range in his hometown of Edgewood, New Mexico, I became excited.

And then I saw them. From far away, they look kind of cool.

I saw right away that they weren’t like the mountains in the Blue Ridge Parkway, or the Smoky Mountains, but that was okay. I am open to trying new things. My husband explained to me that the Sandia Mountain Crest was the end of the Rocky Mountains, and that excited me a little – I was finally going to see the Rocky Mountains!

Yeah, not so much.

The mountains in this part of New Mexico look more like piles of dirt. I was not impressed.

And trees? Yeah, I was disappointed on that front as well. When I think “trees,” I think TREES – big, green, lush…what passes for trees in Albuquerque, New Mexico is more of a shrub.

Now, I’ve heard talk of “real” trees – what I consider to be a tree – in areas like Taos, but I wasn’t in Taos.

I can’t speak for ALL of New Mexico, I can only speak for the Albuquerque area.

It’s dry out in the desert, folks.

Going from a subtropical climate like we have in Miami to the South Western desert…well, it’s no fun.

Even my eye brows looked like they had dandruff.

And don’t even get me started on my feet – I am in desperate need of a pedicure, like yesterday.

But the dryness that comes with life in the desert does have its advantages.

My hair looked FANTASTIC while I was there – even if it did have so much static electricity in it that I was afraid I’d spark a fire. Oh, and don’t make fun of my clothing choices – a girl’s gotta keep warm in the desert! It was still winter there!!

The desert isn’t completely without its upside, though! My husband’s family lives there!

And during the winter? 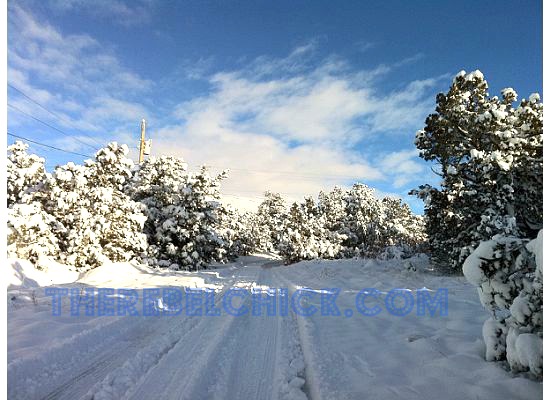 « New Mexico, in Snapshots
Recipe: Brownies with a Tropical Twist »